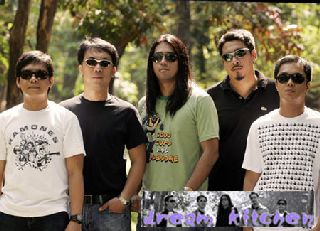 There's always something cooking in the Chef's kitchen. Purveyors of many underground gigs, Dream Kitchen now comes out of their shell, errr kitchen, with an expanded repertoire which was developed through years of perseverance and in constant touch with many music enthusiasts.

Their genre encompasses many, including alternative, post-new wave, indie sound and some kick-ass rock and roll.

Dream Kitchen went  a little heavy into original compositions over the last years, forging a commitment among themselves to seek a wider audience with their new approach to songs and melody that comes straight from the heart-- and their instruments.

Dream Kitchen appeared in two compilation albums with the same song-- "16 hours," which was their first venture into recording. "16 hours" was first featured among eight songs in the 2005 compilation album "8-track," then made a comeback the following year as part of the "6 Underground / Gathering" compilation. Both albums were independently produced.

The "16 hours" video was also nominated for the Best Indie Video Award during the 2006 MTV Pilipinas Awards. It got the second most number of text votes, next only to eventual winner Mojofly with their video "Tumatakbo."

Dream Kitchen has about 20 original songs in their recipe, and the main menu is improving by the day. Get a taste of what the Chefs offer and catch them in their gigs around the Metro. Bon Apetit!